Sorano, the Matera of Tuscany 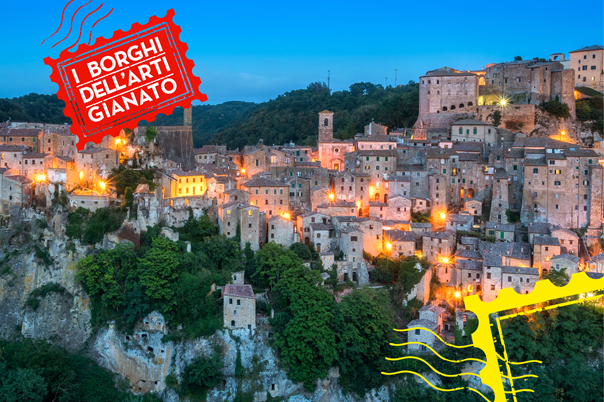 The Municipality of Sorano, called the Matera of Tuscany for its special feature of the numerous rock constructions dug in the so-called area of the tufa rocks, occupies the most southern portion of the region. In this area, characterized by tufa ridges rich with vegetation and deep valleys where the clear waters of several plunging creeks, we can find ancient medieval villages with a rich history and many traditions. The mighty Fortezza Orsini towers over the medieval village of Sorano which is perched on a tufa ridge. The Fortezza was built by the Aldobrandeschi family and later expanded by the Orsini Counts. From the Fortezza one can admire the historic center with its tower-houses, the Collegiate of San Nicola, the Masso Leopoldino and the surrounding cliffs marked by many columbary tombs.

Of particular historic and naturalistic interest is the rock settlement of Vitozza that, like most medieval settlements, lies over a large tufa plain. We have information on this settlement dating back to the 13th Century because it was part of a large feud that included about fifteen castles. Walking along the main cart path one can admire the remains of the fortifications, of the churches and of the many brick buildings besides the very many grottos (over 200) that were used as stables, homes and as workplaces, all of that immersed in a natural habitat of extraordinary beauty.

You can get to the rock settlement of San Rocco following the main road, the Strada Provinciale 22, at about 2 kms from Sorano in the direction of Sovana. At the entrance is a small church devoted to San Rocco. The church was built by the inhabitants of Sorano “by community vote,” most certainly during a plague outbreak, between the end of the 1400’s and the beginning of the 1500’s. Continuing on along the path, we get to a hill that looks like a large panoramic terrace surrounded by greenery and from where we can enjoy an impressive view over the village of Sorano and of the deep valleys surrounding it. Behind the church, a path takes to the Via Cava di San Rocco. Probably of Etruscan origin, this path, deeply dug in the tufa ridge, has a great scenic suggestion. Following the via cava, we get to the valley of the Lente river.

Since 1998 these locations, rich of archeological, historic, naturalistic values, form the Archeological Park “Città del Tufo,” a huge open-air museum where Nature and Art merge in an inseparable whole. The testimonies and the signs of a human presence, going back to the most ancient times, can be seen in the countryside, in the historic centers, but above all in the archeological areas, a tangible sign of an extraordinary concentration of civilization. On this territory are the Etruscan those who have left the most visible signs of their presence: it is enough to think of the Etruscan necropolis of Sovana with its monumental rock tombs and the famous vie cave.

I work on an ancient loom and I am a part of its history. I like to experiment and to elaborate free techniques that cannot be reproduced on mechanical or electronic looms. The hands, accompanied by the love for my work, are the best and most versati...

Bandarin Ceramics Atelier was founded in 1980 in the center of the medieval Sorano, thanks to the initiative of Beatrice Bandarin, a Venetian ceramist. Moreno Migliorelli and Laura Corsini continue her work today following their own style, recognized...