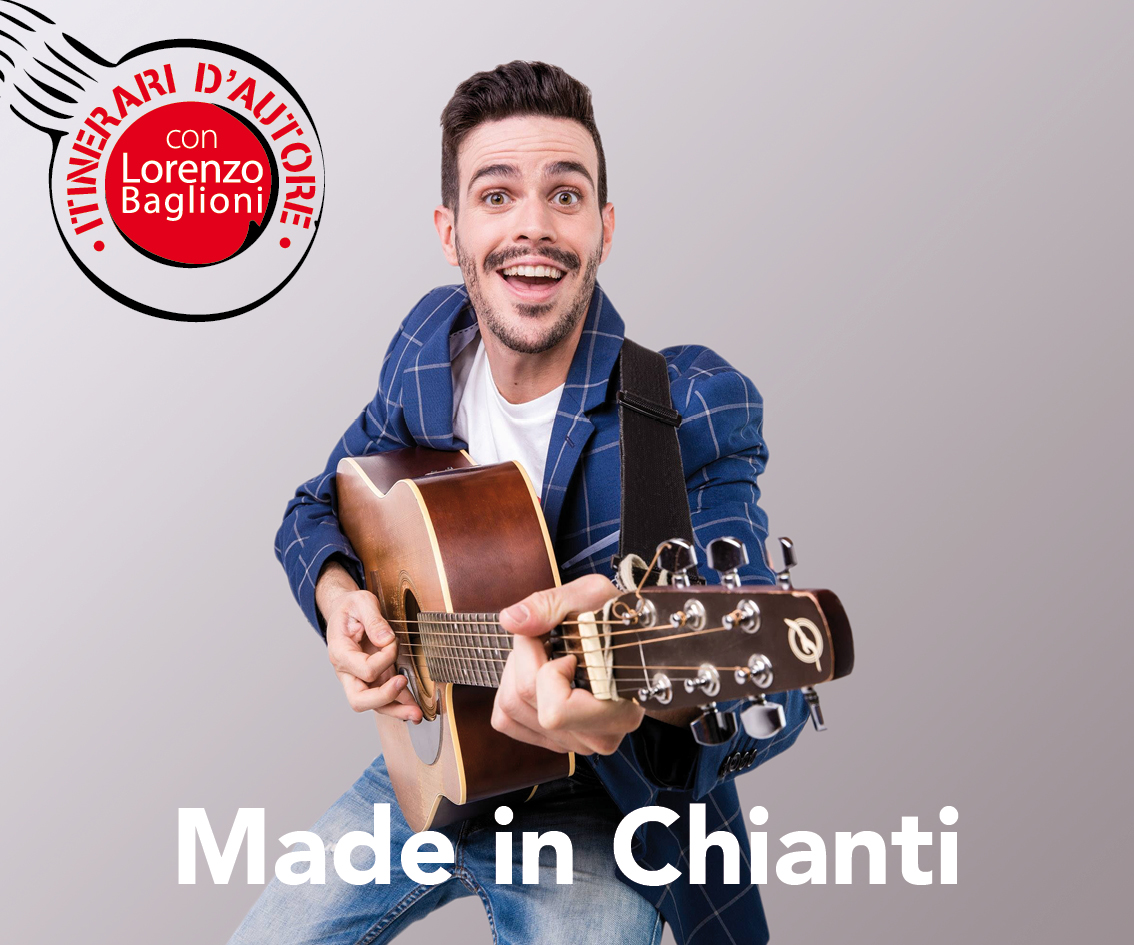 Act 1: from Greve to Florence

The itinerary proposed by Lorenzo Baglioni is an itinerary of the heart winding through physical spaces, but also and perhaps mainly, through time: a path studded with small gems, more or less known, each representing a landmark in the history of this multi-faceted personality.

Starting point: Greve in Chianti, his childhood home and the place of his early education, with its “folklore”, its colors and above all, its flavors.

The first stop is connected to food: we visit the Macelleria Falorni (Falorni butcher shop), an integral part of the landscape of the main piazza of Greve and of the habits of its inhabitants: one of the fundamental elements of that “grevigianità” (being from Greve) so many times quoted by Baglioni.

It is a butcher shop, a wine cellar, a place for events, where the locals go, but very well known also to the many tourists visiting Greve in Chianti. A meeting place, a place of cultural exchange, a place for good food and good wine, but also a “lieux de mémoire” for Baglioni as a child and as a young adult.

The second stop is at Impruneta, on the way to Florence, and it is by an important artisanal institution: the Terrecotte Poggi Ugo, one of the historic furnaces in Impruneta, a point of reference in the production of the top of the range famous terracotta artifacts. The manufacturing is all made by hand using traditional techniques. The products created offer a wide variety, ranging from traditional shapes and objects to innovative experimentations realized in cooperation with artists, designers and architects.

Why the “cotto”? Because it is one of the fundamental sectors of the artistic handicraft of Tuscany, because the historic furnaces and the artistic terracottas are the emblem of Impruneta and its territory, because  Lorenzo Baglioni, starting in middle school, was training with the terracotta in the workshop, an element that has become an integral part of his “culture of doing” and of his strong local roots.

Third stop is the Florence of Baglioni when studying mathematics at the University, right after moving to the capital of Tuscany and once again a place connected to food: the Antico Beccaria, in Piazza Beccaria, a pub with kitchen that has become a Florentine institution. For Baglioni it is the place where to eat excellent made to order sandwiches, created using local products, offering a great variety and that can be customized. It is also a meeting place, for a stop in the evening, almost a “second home” for the student who did not feel like cooking, and dining, alone.

The next stop is the first one of the Lorenzo Baglioni as an artist: Magma Magnoprog Music and Arts, artistic production center, a place of creativity and learning of the main performing disciplines, from dance to acting, from music to singing. It was in a musical produced by Magma that the young Lorenzo made his debut, almost by chance. This is why the artist remains so strongly connected to this institution that exudes a great positive energy, buzzing with the artistic activities of many people, different in their age, sex, profession and that represents an important meeting place for the city.A true magma where the different performing disciplines find a form of fusion that enriches them, thus creating the premise for new and successful shows.

To the studio Magma is connected another pivotal institution in Lorenzo Baglioni’s journey: Tuttascena – Ideas for set design. It is a workshop  formed by the graduates of the “Accademia di Belle Arti” in Florence that creates stage set designs: here that magic world that creates the framework of the theater performance is brought to life, that special magic that allows the spectators to immerse themselves in the reality of the play and to forget that they are attending a show. Tuttascena is a traveling laboratory of ideas housed in the Teatro Moderno in Tavarnuzze at Impruneta.

Founded in 1806, the Antica Macelleria Falorni has been producing premier class salami for over 9 generations, following artisan techniques and adhering to traditional methods and classic recipes handed down from father to son throughout the years. ...

The historical Terracotta manufacture Poggi Ugo realizes since 1919 more than 1500 different articles for exterior and interior use, using the famous Impruneta clay. The range of products encompasses classical, modern/design models, created in collab...

The Antico Beccaria has become an institution in the Piazza Beccaria in Florence. In its internal rooms and in the outside patio set up in the summer, there is always a festive atmosphere, especially tangible when the local soccer team, Fiorentina, ...

MAGMA is matter in turmoil, rumbling thoughts: a cultural space born to house art in all its eruptive forms! The home of the Associazione Culturale Magnoprog, MAGMA produces theater, music, singing, dance, visual arts and design. ...

Our specialty is planning and creating stage sets mainly for the various sectors of opera theater and prose. Besides the classic theater genres, we also specialize in making sets for musicals, with a special focus on the needs of musicians, singers a...