Perennial snow. The marble of the Apuan Alps. 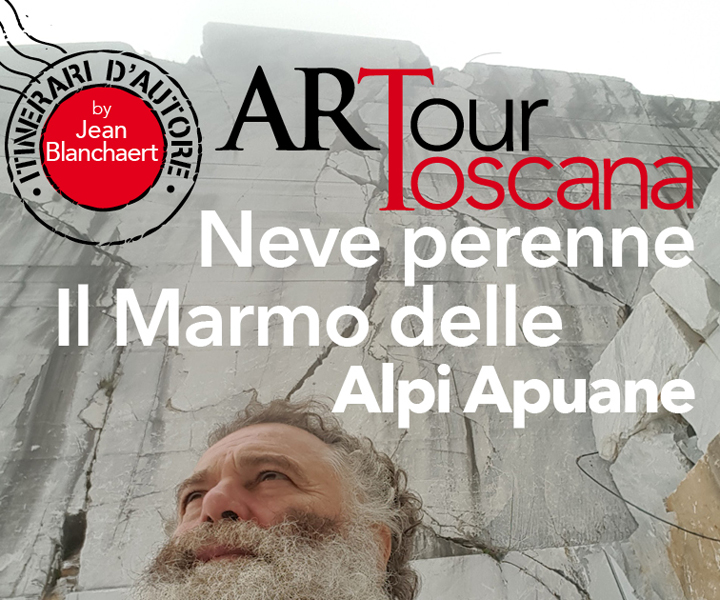 “I saw an angel in the marble and I sculpted until I set him free.“

When we were children and our parents took us to the beach for the summer holidays at Poveromo, at the Ronchi di Massa,  each time we were caught by surprise when we saw snow, in the middle of the torrid August, on the mountains.

Although we knew from our parents that it was marble, this astonishment caught us every time, exactly like in the case of the naïf spectator described by the playwright Alessandro Fersen who is afraid, is moved to tears and laughters, also when watching a movie for the fifth time.

The perennial snow on the Apuan Alps will always be there to welcome us, only a few kilometers from the beach, where people are enjoying their summer vacations. From the top, in their brief pauses, the workers of the marble quarries give from time to time a glance to the sea and the beach with the umbrellas to then quickly go back to their perennial snows made of marble, in a unique landscape that at first sight seems farther away than Tibet.

Once it reached the workshops, the marble will be worked by the rough-hewers, the stonemasons, the finishers, the ornamentalists, the dressers and also by the programming engineers of those robots that nowadays have the capability to make a sketch tridimensional. Let’s not forget that the great director of this entire operation remains the sculptor, the one who will sign the artwork.

In proposing a thirty kilometers itinerary that connects Pietrasanta with Carrara, we start from the South, from Querceta (Lucca), dalla Henraux, whose president, Paolo Carli, inspired by Erminio Cidonio, the CEO of the company in the fifties and sixties who took on the Monte Altissimo sculptures of the caliber of Henri Moore, positions himself today as a reference point for many artists, young and not. The biennial  International Prize for Sculpture by Fondazione Henraux, chaired by Philippe Daverio,  in its fourth edition in 2018.

The 2014 winner, Mikayel Ohanjanyan, received the Golden Lion at the Venice Biennale in 2015 as one of the artists of the Armenity exhibition. Ohanjanyan is housed in the Henraux plant where his studio is located. Also in Querceta lives and works another excellent contemporary sculptor, Bruto Pomodoro whose workshop is located inside the large historic workshop of his father, Gio Pomodoro. Here the visitor will be able to admire the works of both sculptors.

Also in the “South”, we point out in Pietrasanta the workshop of Renzo Maggi, one of the last classic “old fashion” sculptors, often called to the US to give shows using the hammer, the scalpel and marble.

We continue our journey moving North, to Carrara, to he Studi Nicoli , founded in 1835 and managed today by Francesca Nicoli. The Nicoli artistic laboratories, frequented in the thirties by Mario Sironi, Arturo Martini and Fausto Melotti, more recently have housed artists of the calibre of Louise Bourgeois and Anish Kapoor. Next to the Studi Nicoli, is Patty Nicoli’s home-studio, herself a notable sculptress.

Four young artisans of the marble, who still use the scalpel with great skill, founded in 2016 the Cooperativa Scultori di Carrara, a small workshop offering great quality.

Also in Carrara, we cannot forget the Studi d’Arte Cave Michelangelo lead by Franco Barattini and directed by Luciano Massari, who have attracted artists like Maurizio Cattelan, Paul McCarthy and Jan Fabre.

For these thirty kilometers of white itinerary wear your sunglasses because you will be dazzled by the light and the beauty.

“For a few years, in the company catalogs, monographies and the advertising material of Henraux, we have been adding, under the company name, this caption: since 1821. We do this because we are legitimately proud as there are really very few Ital...

Born in Milan, Italy, in 1961, Bruto Pomodoro starts his artistic journey in 1994, leaving behind a long career devoted to scientific design. Painter and sculptor, focuses his strictly abstract artistic quest on the most secret aspects of the living...

Renzo Maggi was born in Seravezza in 1944 and after graduating as Art Master at the Stagio Stagi Institute of Pietrasanta(Lucca) he starts his apprenticeship under the guide of the sculptor Leonida Parma. After working in Milan for a short period he...

The Studi di Scultura Nicoli started in 1863 at the foot of the Apuan Mountains and since then have been keeping their activity of artistic laboratories in the center of Carrara. This way, the centuries-old tradition of the artistic crafting of the m...

Patty Matilde Nicòli was born in Carrara. After graduating from the Liceo Artistico of Carrara, she attended the Accademia di Belle Arti for sculpture in Carrara and at the same time she got licenced to teach artistic subjects, an activity she con...

The CARRARA SCULPTORS COOPERATIVE was created by the young Carrara Masters Riccardo Barsottini, Raffaele Bruzzi, Diego Zampolini and Andrea Franceschi. Four young sculptors who still use the chisel and who know how to score the points by moving them ...

The Cave Michelangelo group, led by Franco Barattini and Sons, and under the technical direction of Luciano Massari, promotes the city of Carrara as a centre based on the extraction of marble and on sculpture, and runs the Studi d’Arte and Cave Mic...