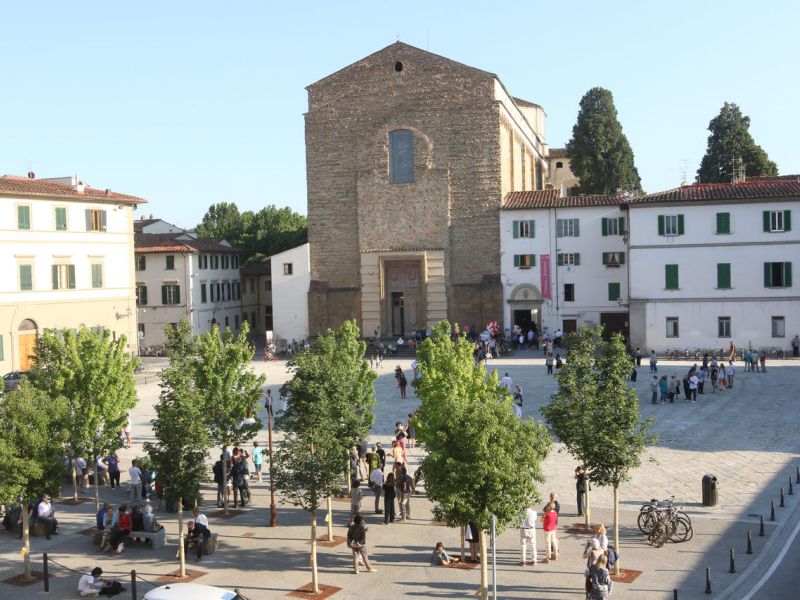 Like in the plot of a movie, the itinerary designed by Tiberio Timperi’s represents, besides an actual physical itinerary, a life journey.

A journey that started many years ago, back in 1987, when the well-known TV anchor started to work at “Punto Radio” in the Borgo Stella (a very short, little street in the Oltrarno.) Since then, the years he lived in Florence were concentrated, both professionally and personally, in the historic neighboroughood of San Frediano where he chose to buy a house. His choice proved to be a sort of incubator, a cocoon that will create an umbilical chord between the Roman presenter and the Florentine community: a sort of adoption. Timperi tells us like, time after time, he could always find Borgo Stella again. He quotes the example of the Australian movie “Lion” with Nicole Kidman that tells the story of a lost child. Florence for Tiberio is also the place where he met the great love of his life, whom, like all the great loves, “one loves and does not marry.” The Florentine itinerary proposed by Timperi can be divided into two categories: one linked to food, the other one to handicrafts. The  problem of San Frediano, says Tiberio, is that “ when you go out to do your food shopping, your schedule gets completely messed up, because you stop to chat with everyone; time expands, it’s great, actually.”

The first  stop described by our TV presenter is the Sandy Bar, an ideal spot for breakfast, located in front of the historic Palazzo Pitti.

In the second stop, he tells us how much he is connected to and fascinated by Brandimarte‘s silverware, one of the historic brands of Florence, famous for the undeniable professionalism of its silversmiths, whose representative office is located at Officina Creativa – Il Vecchio Conventino, 20 Giano della Bella Street. Officina Creativa is a space that was born as a multi-functional and milti-sector presence that aims at being a driving force for local artistic handicrafts, both florentine and tuscan.

The third stop is by the Dolce Emporio‘s workshop. Tiberi dates his discovery of this location to the days when he was invited to work at the Teatro del Cestello. He still remembers that at Christmas and Easter of that year he left Rome on purpose to go stock up at this “bottega.” He takes us by hand in his journey:” When you come in from the San Frediano’s gate, on the left, there is the Laboratorio di scultura Romanelli. I got lost inside: nothing less than a Fellini’s or a Storaro’s movie set. In this place it feels as if time has stopped forever.”

The fifth stop represents an important location: it is here, in fact, where Timperi wrote a large portion of his book. It is the I`Brindellone restaurant in Piazza Piattellina. The well-known TV celebrity tells us of the hours spent in front of a computer screen in these places, where at the beginning he knew no-one. I`Brindellone is a restaurant with a two-face personality: at lunch here you can meet from the car mechanic to the plumber, while at night, even if the restaurant keeps its Soul, in the highest and noblest meaning of the word, it becomes a very fashionable spot.

Timperi’s itinerary, structured like in the scenes of a movie, continues with a stop at ll Santo Bevitore where he stumbles upon Ron Howard, the director of the movie “Inferno.” It is the sparkle that makes him go back in time, to the unforgettable memories of the TV series “Happy Days.” He tells us: ”Florence is a very cosmopolitan city, much more so than one might think, much more so than Milan, which is so scattered. When I saw the movie “Inferno” I realized that it was shot it in the surroundings of my home and I was happy. I would like to see more movies being made in Florence.”

The next to the last stop on the itinerary takes place in a handmade shoes bottega, the  Calzature Francesco, to then continue on to the Osteria del Porcellino. The restaurant is located in the lively heart of the Florentine historic center where the old arts and crafts and people from all over the world meet.

In this tale told by  Tiberio Timperi, we then encounter the workshop of Orologeria Buffi, a business that has been passed down for generations. In the characteristic Piazza Piattellina, near the better known Piazza del Carmine, is an artisanal framework that resists to time and modernity:  here is Stefano Buffi’s new artisanal workshop “L’Orologiaio.” Stefano, the young owner of the workshop, learned the craft from his father Renzo and he now repairs and restores watches as he has been doing since his was eight years old. Moreover, he represents a confirmation of the artisanal liveliness present in the Oltrarno. All the watches, old and new and the mechanisms that move the hands and indicate the passing of time, have no secrets for the Buffis.

Timperi’s itinerary ends at the Ippogrifo Stampe d’Arte where for over forty years the prints have been colored by hand, signed and numbered by the author, following the tradition of the ancient Florentine bottegas.

In the historical district of Florence where the artisans work and reside, L'Ippogrifo Stampe d'Arte has recreated the antique technique of etching (acquaforte in Italian) for over 40 years. Gianni Raffaelli, together with his wife and children, real...

The Calzaturificio Francesco da Firenze is located in via Santo Spirito, in the heart of the Oltrarno, the handicraft’s neighborhood of Florence. A family run business founded in 1977, this shoemaking firm has been creating quality leather made-to-...

Overlooking Via di Santo Spirito, the restaurant, opened thirteen years ago by Marco and Martina Baldesi and Stefano Sebastiani, has a very appealing ambience, with vaulted ceilings and a tall dark wood counter where one can also sit. Along the walls...

The story of Brandimarte, founded in 1955, is a typical Florentine one: an artisanal firm created by Brandimarte Guscelli in an empty commercial space in the via Ponte alla Vittoria. Today, Bianca Guscelli, the daughter of Stefano and grand-daughter ...

We are in the Oltrarno: the residents of this neighborhood all know one another and call each other by name, the baker, the news vendor, the restorer, the “doratore” (gilder) the shoemaker, the cabinet maker, the restaurateur. This is the lesser ...

Studio Galleria Romanelli is an authentic sculpture studio where the same family of artists keeps making and trading sculptures after two centuries of activity. Replicas and original artworks in plaster, bronze and marble are on sale online and in t...

The walls of the Dolce Emporio have been dusted in sugar for the past four centuries. For over two-hundred years, between 1531 and 1748, the nuns of the Monastery of Archangel Raffaello kneaded flour, spices, dried fruit and honey in the space that ...