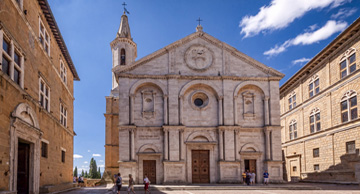 Originally there was the sea. The Val d’Orcia was so born: from the waters of 5 million years ago.

It’s a land that has inherited from the sea the roundness of the wave, the characteristic shape of the landscape.
To the traveller, Val D’Orcia appears as aVal d’Orcia an immense sea of changing colours, green, yellow, auburn, brunette . Colors that light up in the handicraft products of these lands:
• copper containers
• candle holders, candelabra, wrought iron tables and chairs
• Brass furniture
• ceramics with floral and vegetable patterns
• majolica vases and plates with artistic designs of animals

Montepulciano, Pienza, San Quirico d’Orcia, Montalcino: names that evoke one of the finest wines in the world, but also an iridescent universe of unforgettable images, the ones that have crystallized Tuscany in a frame of universal fame: velvet hills and tidy rows of cypress trees on the edge of the hills.
Talking about these countries is to describe Tuscany that the rest of the world has known and idealized through advertisements, movies and magazine covers.

For those who live there is a sedimented daily beauty, but for tourists, convinced that those places are the result of imagination and skillful photo editing, it’s a disarming experience. The Val d’Orcia is a real dream that unfolds under endless blue skies, only here it’s possible to understand how the unerring perfection of nature is for the common man a distant goal that only the local craftsmen were able to tap.

To take a dip in one of the most exciting places in Tuscany, look at the route.

Biagiotti Arte del Ferro was founded in the early 1900s by grandfather Alfredo who began working in iron and other metals, such as copper and brass, to meet new and varied market demand of the period. His son Mario enthusiastically took up the trade ...

The company Sbarluzzi born on 1954 from the Ruggero Sbarluzzi creativity handed down through generations by our family that continues working and using the ancient techniques. Each hand-painted piece becomes an unique sample, a masterpiece of art, in...

Carlotta Parisi was born in Montalcino in 1975 where she lived happily until 1994 when she transferred to Milan to attend the School of Graphic Arts to study publishing illustration. After her diploma she decided to stay on in Milan and she worked as...